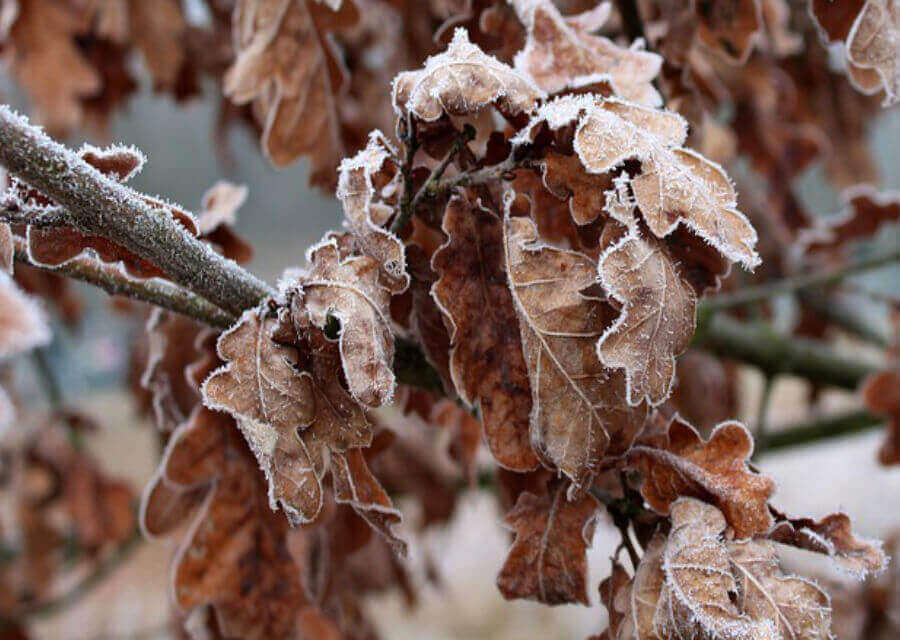 Learn about this summer’s Floating Lantern event, read a special message from our board chair and find out about the upcoming Peace Fair. Read our September 2018 newsletter here! 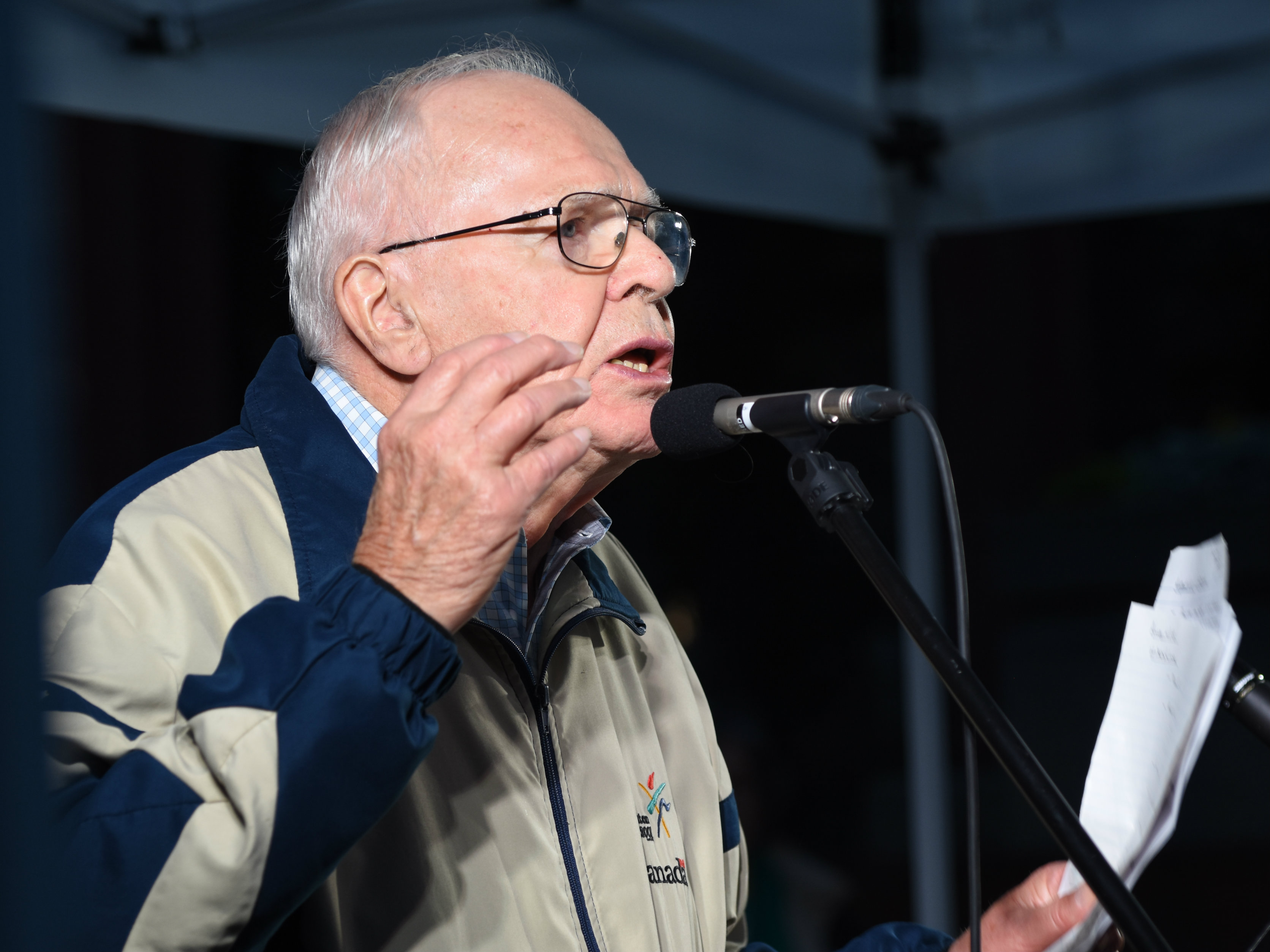 CALGARY, August 7, 2018 – The Canadian government should press U.S. president Donald Trump and Russian president Vladimir Putin to hold a summit on nuclear weapons reductions, former senator Douglas Roche told a Calgary rally commemorating the 73rd anniversary of the atomic bombing of Hiroshima and Nagasaki. “Nuclear disarmament is in a state of severe crisis, and the leaders of the two most powerful nuclear states have a duty to humanity to resume dialogue and negotiations for nuclear arms control and disarmament,” he said.

As an honorary citizen of Hiroshima, Roche spoke to the Floating Lantern Peace Ceremony convened by the Calgary Ploughshares Society. He called on the Canadian government to reach out to both the U.S. and Russia to overcome their hostilities and re-energize the pursuit of nuclear disarmament to find common ground. “Canada must speak up in the name of humanity and join many non-nuclear weapons states in demanding an end to nuclear threats,” he said.

Also, the Canadian government should seize the moment opened up by the parliamentary committee on National Defence, which urged the government “to take a leadership role within NATO in beginning the work necessary for achieving the NATO goal of creating the conditions for a world free of nuclear weapons.”

Roche said that now is the time for Canada to sign the new Treaty on the Prohibition of Nuclear Weapons and state that Canada will, through dialogue and changes to its own policies and practices, persist in its efforts to bring NATO into conformity with the Treaty. He urged civil society to call their Members of Parliament and express deep concern at the government’s refusal to sign the Prohibition Treaty.

The Hon. Douglas Roche, O.C., is a former Canadian senator and Member of Parliament from Edmonton. He was Canada’s ambassador for disarmament to the United Nations and is founder and chairman emeritus of the Middle Powers Initiative, an international network of eight 2 international non-governmental organizations specializing in nuclear disarmament issues. In 2010, the City of Hiroshima named him an Honorary Citizen for his extensive nuclear disarmament work and particularly for founding the Middle Powers Initiative.

For further information (media only): Kathleen McWilliams at 403 620-5343 or kmcwill@telus.net 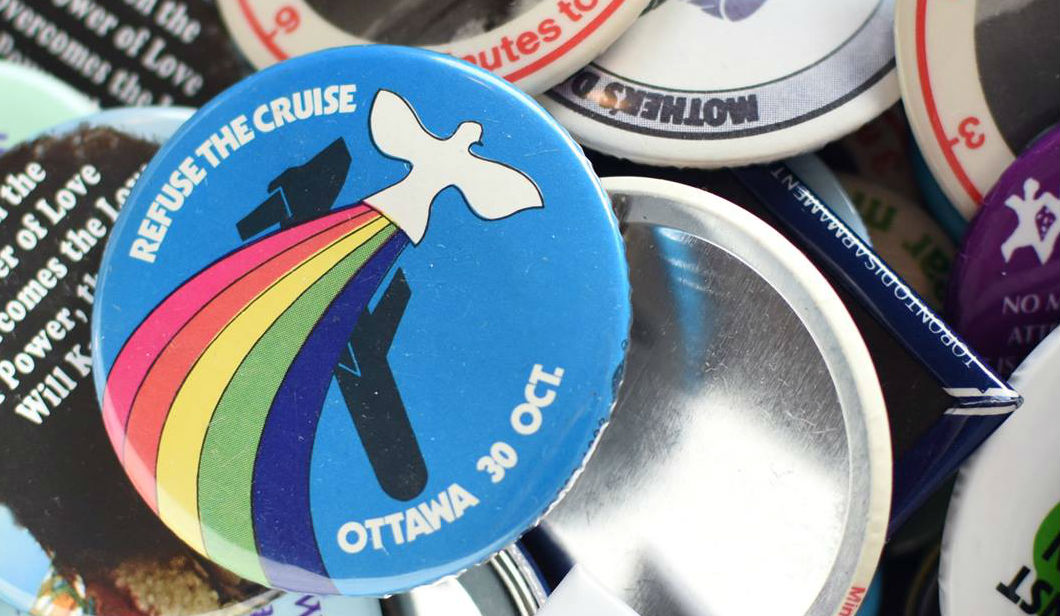 With Ploughshares’ Calgary’s Floating Lantern Peace Ceremony less than two weeks away, we are putting out a call to action to step up and support abolishing nuclear weapons.

Here’s what you can do today. Call your MP and ask two simple questions:

2) What are they doing to urge the government to negotiate for the elimination of nuclear weapons?

Finally, if you belong to any faith groups, unions, or any other type of community organization encourage them to endorse the “Call on Canada to sign the Treaty on the Prohibition of Nuclear Weapons.” 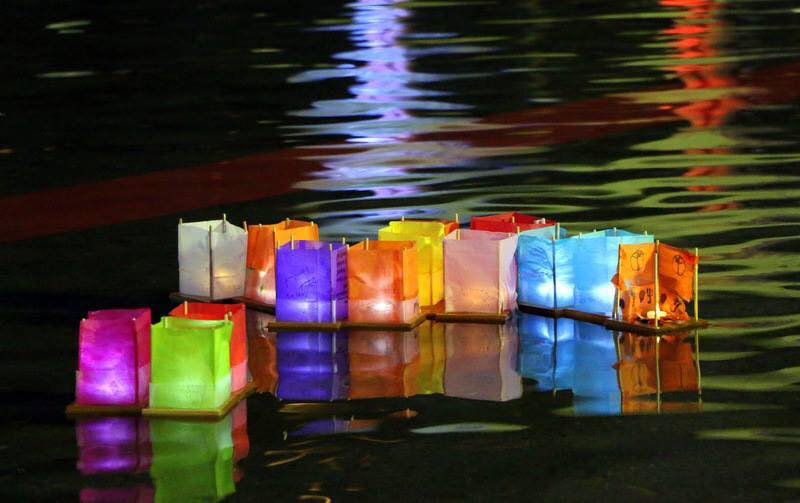 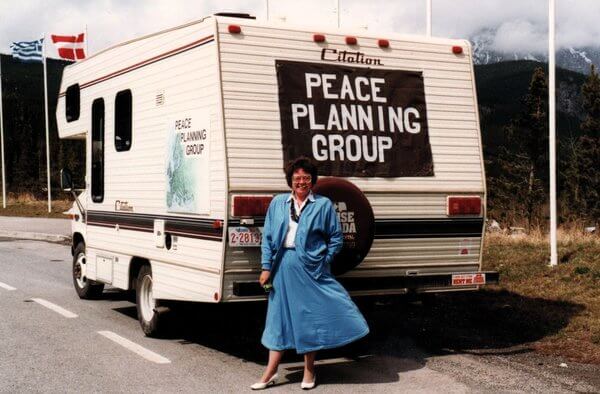 Thanks to Rabble.ca for this interview with one of our founders and current board chair Trudy Govier.

Trudy has been actively involved in peace activism in since the 1980s. The host of Talking Radical Radio, Scott Neigh, speaks with her about how the world and peace activism have changed in the past three and half decades. 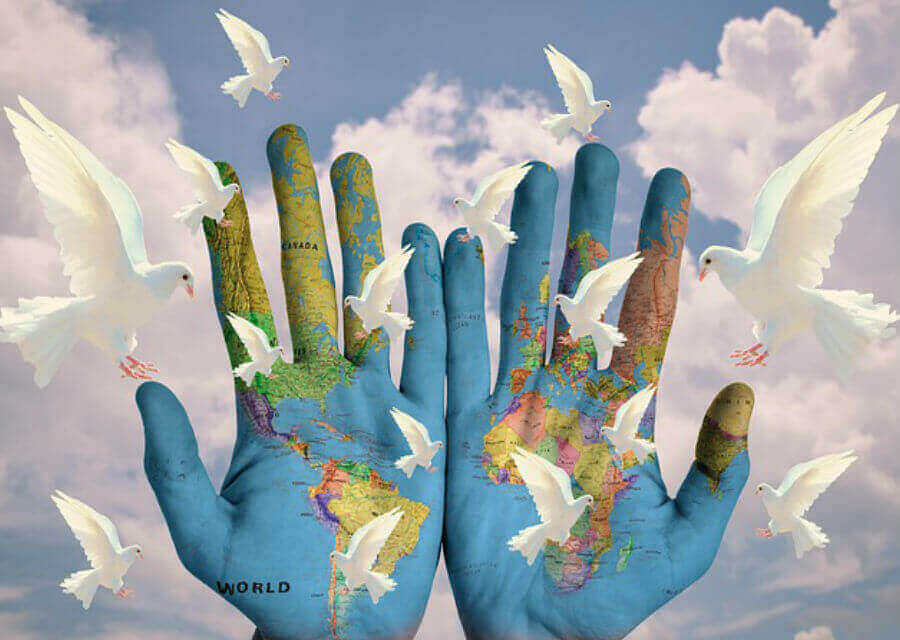 Registration is now open for our May 5th community conference, The Challenges of Peace and War, held in conjunction with the Calgary Association of Lifelong Learners. Click here to register online through the CALL website. The price is $25.00.

World politics is shifting, requiring the deployment of different strategies in conflict zones. This day-long program will explore shifts in world politics and specific successes and failures in Canadian peacekeeping and nonviolent conflict resolution.

Dr. Rob Huebert, associate professor of political science at the University of Calgary, will deliver the keynote. Check out the event program and panelist bios here.

We look forward to seeing you at this exciting event! 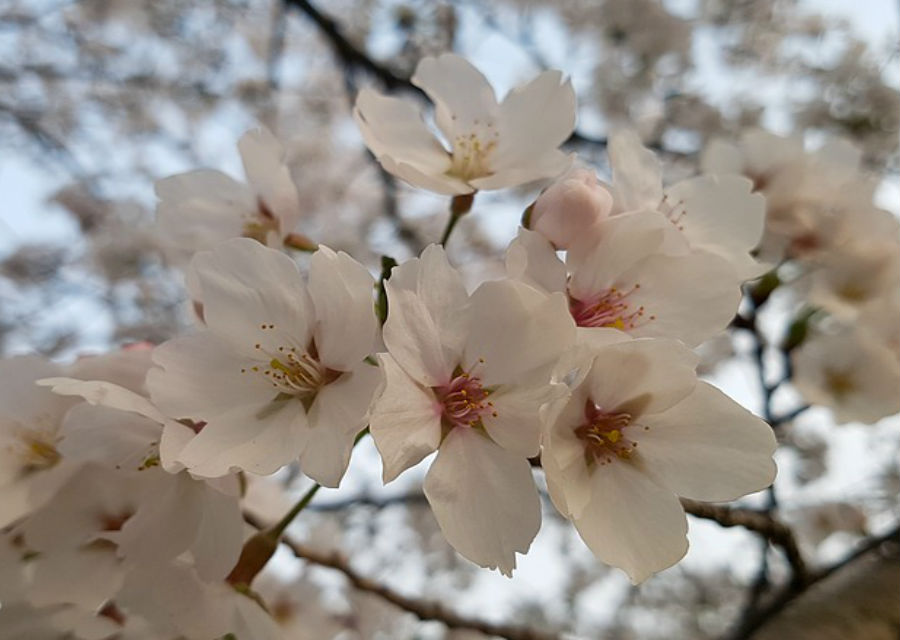 Download our  April newsletter. Read about the history of Canada’s involvement in UN peacekeeping missions and the peacekeepers’ latest deployment to Mali and find out about our upcoming events. 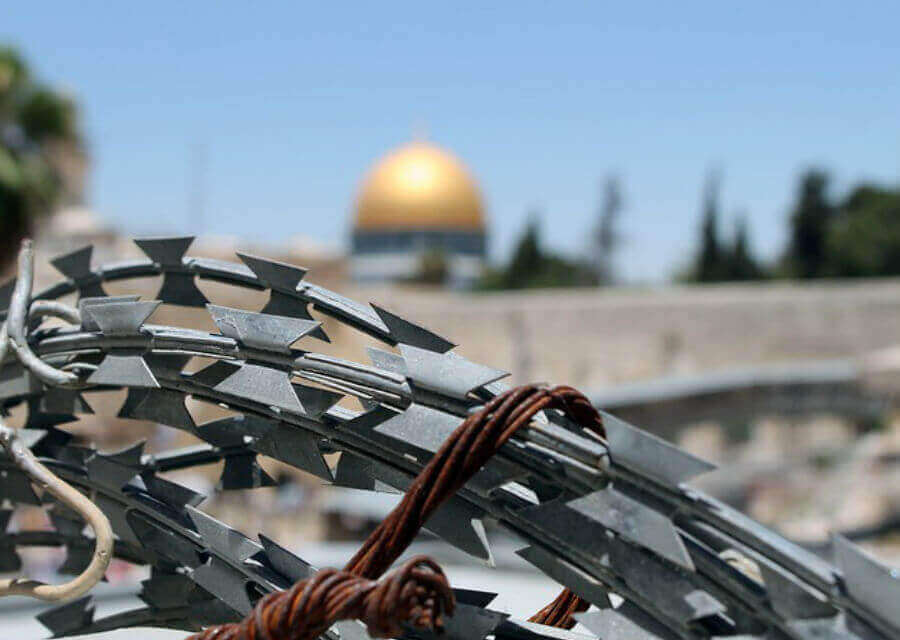 The Mennonite Central Committee has worked in the Palestine-Israel region for nearly 70 years. Come hear Abe Janzen and Carol McNaughton talk about the committee’s work April 11th at 7:00 pm at Parkdale United Church.

Abe Janzen served as the executive director of MCC Alberta for 21 years, retiring to Donor and Church Relations in the fall. He has travelled to the Palestine-Israel region multiple times and is passionate about working for peace. Before beginning with MCC Alberta, Abe and his wife served with MCC in Bolivia for 10 years. He is originally from Saskatchewan, where he studied adult education. He blogs regularly at somemessynotes.wordpress.com.

Carol McNaughton is the current peace program coordinator with MCC Alberta, a role that encompasses advocacy, community engagement, and coordinating serving and learning programs for youth and young adults. She recently spent a year serving with MCC in Cambodia and has also spent time as a student/intern in the Philippines, Turkey, and South Africa. Carol completed her Bachelor’s of social work at the University of Calgary and is a registered social worker.

We look forward to seeing you there! 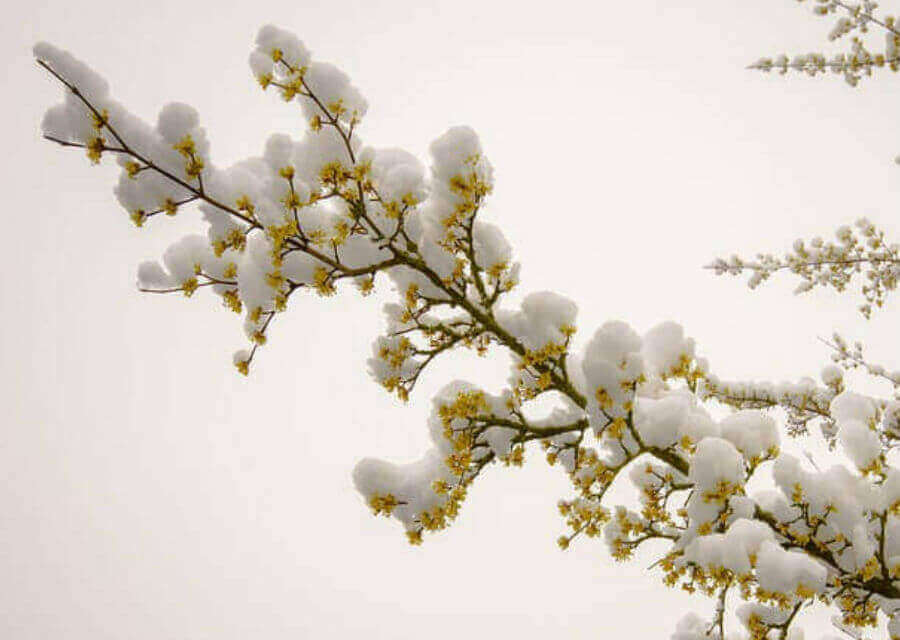 Our March newsletter is available for download here. Highlights include info about our upcoming educational meeting with Professor Mark Ayyash on Islamophobia and an invitation to add your name to the petition for Canada to sign the UN Treaty on the Prohibition of Nuclear Weapons. 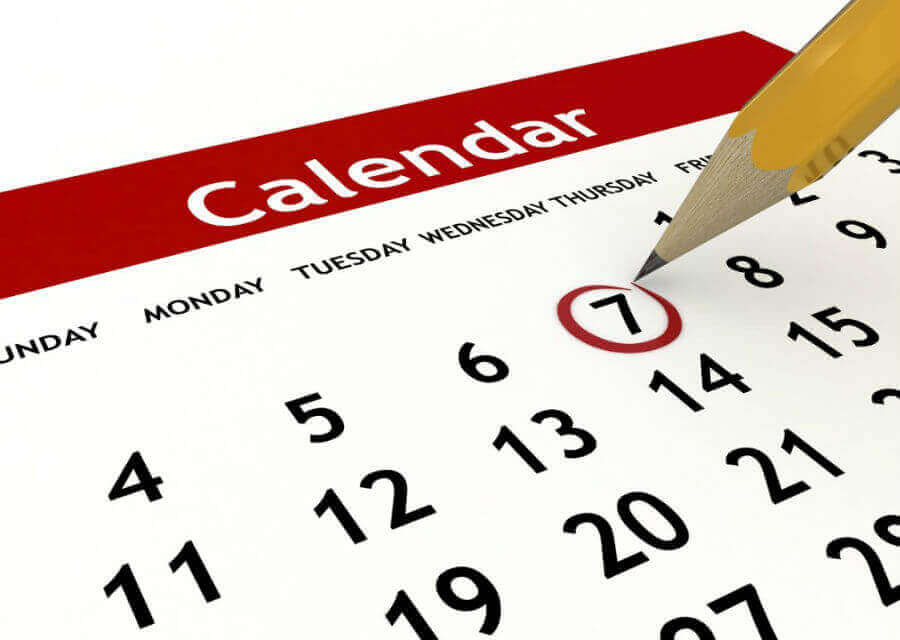 Mark your calendars for an exciting community conference co-sponsored by the Calgary Association of Lifelong Learners and Ploughshares Calgary Society.

Given conflicts in the Middle East and elsewhere plus the horrifying possibility of nuclear war, it seems appropriate to take stock and consider alternative solutions. The program will focus on dilemmas and possibilities with regard to peacekeeping and Canadian foreign policy and will feature:

Coffee and lunch will be provided. 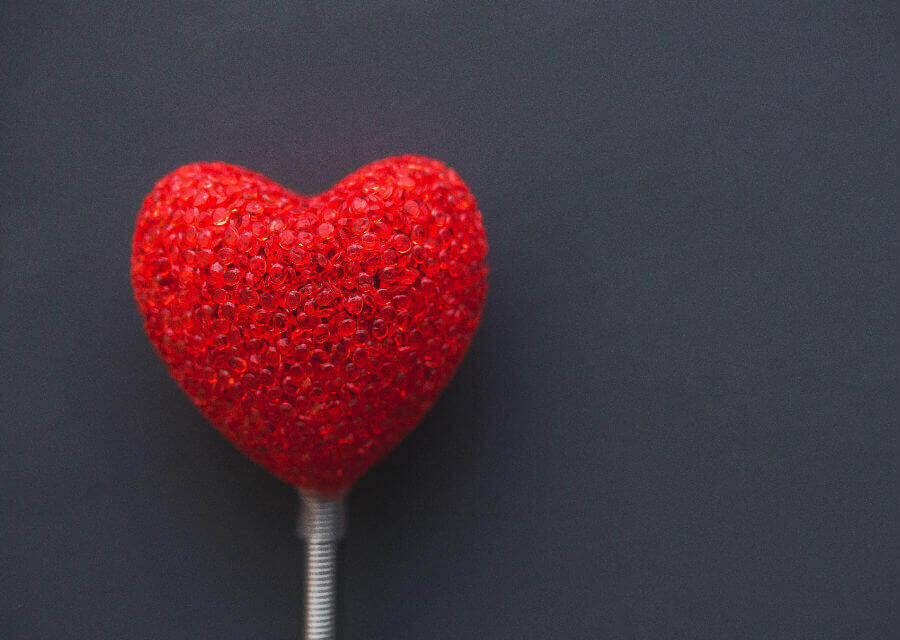 Join us for our monthly educational meeting February 21st as we try to answer the question: what does it mean to love your enemies? The Rev. Dr. Grant Dawson will be presenting from 7-8:30 pm at Parkdale United Church.

Reverend Dawson served at Knox United Church here in Calgary for 36 years. He received his B.A. in Philosophy from McMaster University and M.Div. from Emmanuel College.  He was given a Doctor of Divinity by St. Andrews/St. Stephen’s College in 2004. Reverend Dawson retired in 2013, but remains active in the church and as a playwright.

Don’t miss this event as we dive into a challenging topic with Reverend Dawson in celebration of Valentine’s Day!

Read the UN secretary general’s New Year’s message calling for unity to overcome the many challenges facing our world, find out about Justice Rosalie Abella, who was awarded this year’s Calgary Peace Prize and more in the February issue of Peace News. 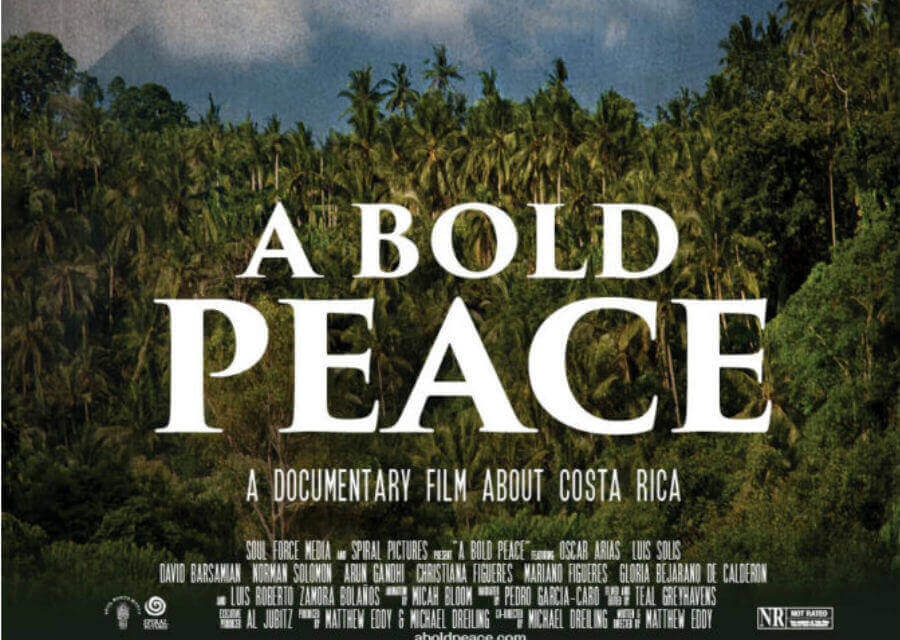 Join us Wednesday, January 10th at 7:00 pm at Parkdale United Church for a viewing of A Bold Peace: Costa Rica’s Path of Demilitarization. We will be joined by Dr. Pablo Policzer of the University of Calgary, who has held the Canada research chair in Latin American Studies.

Over 60 years ago, Costa Rica became one of the only countries in the world to disband their military and redirect resources towards education, health and the environment. Since then, the country has earned the number one spot in the “Happy Planet Index.” How have health and happiness come to occupy such a prominent place in this small nation? 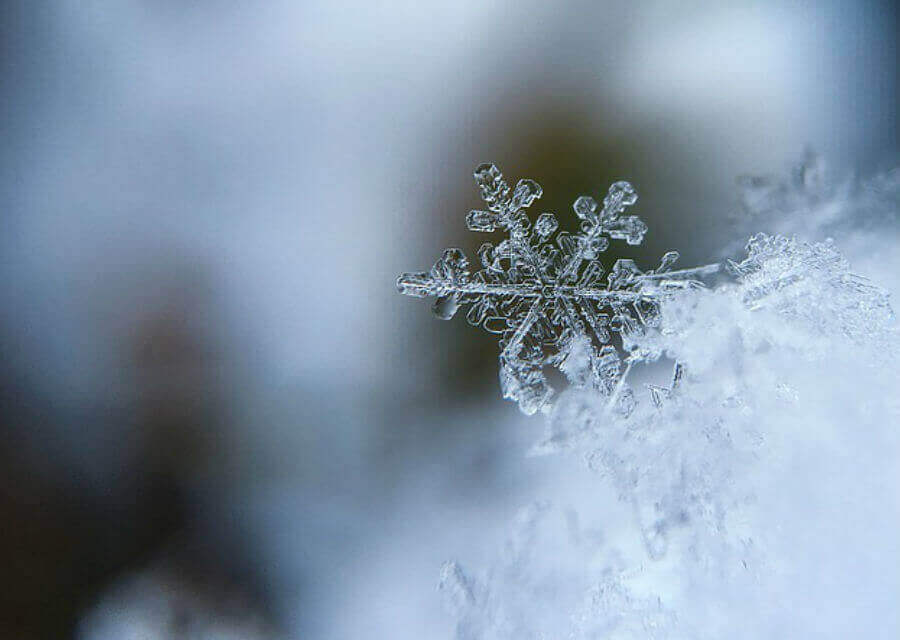 We’ll be thanking all the volunteers and supporters who contributed to the success of our work this year at an open house at Parkdale United Church December 9th. Join us from 2-3 pm for finger food, games and lively conversation!

Interested in getting involved in 2018? Come out and find out more about our work. 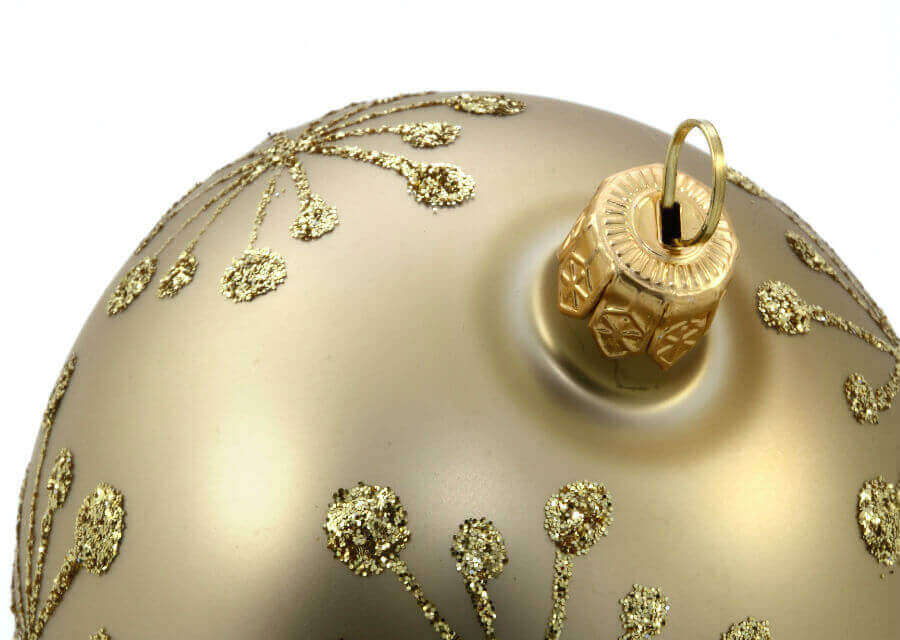 Join us for a holiday fair supporting social justice, peace and the environment Saturday, November 4th between 9:30 am and 4:00 pm at Parkdale United Church.

Over 20 vendors will showcase unique items. Admission is $3.00 (free for children under 12), and there will be a light lunch available for purchase. 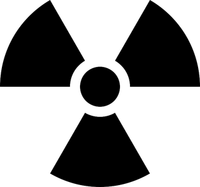 Could your money be funding the development and production of nuclear weapons? Join us for a presentation by Devan Legare of Manulife Securities on October 11th at 7 pm at Parkdale United Church.

The thermostat on your wall might be made by a company that also produces parts for nuclear weapons, while several of Canada’s major banks have invested heavily in companies involved in their production, maintenance and modernization. 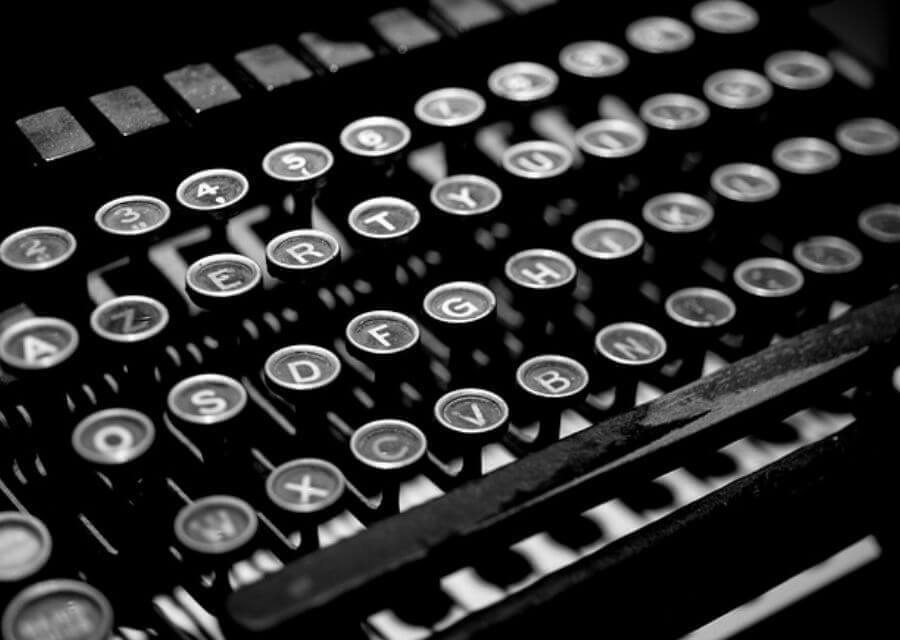 Are people who object to off-colour jokes too sensitive? Can words ultimately contribute to violence? How do we balance the right to freedom of expression with the need to prevent the spread of hate? Come out and consider these questions and more with a dialogue by philosophy professor Dr. Trudy Govier. September 20 7-9pm at Parkdale United Church. Lively discussion to follow!